Defend the Weak and the Fatherless-An Ethiopian Adventure

God is always on the move, it’s just sometimes hard to see where He is leading. 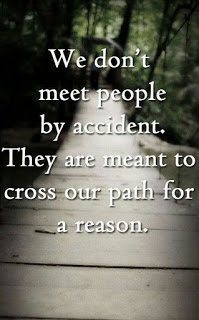 I had no idea when I took my first trip to Ethiopia in 2010 that it would become a place that is so dear to me. Going has opened my eyes to God’s goodness and glory in ways that I don’t believe I would have experienced had we not gone. It has also taught me to trust and follow the Lord’s promptings and direction, even when they don’t make sense, and that’s a hard lesson for someone like me who likes to have things under control.

“For my thoughts are not your thoughts, neither are your ways my ways,” declares the Lord.
Isaiah 55:8

I was recently reflecting on how God crosses our paths with certain individuals and allows certain experiences in our lives and how they impact our future trajectory.

When we look back, we can see God’s hand orchestrating all the details.
That is how I see this next trip to Ethiopia.

When I left Ethiopia last November, I felt a sense that God was closing a door. We had met all of our kids’ remaining birth relatives, taken all of the oldest kids back with us for visits and spent time with all of our sponsor kids. I left feeling it would likely be many years before I returned again.

That was four months ago and here I sit, waiting for my first flight to start a new journey right back to the country that I love so much. There are so many details to share on how we’ve gotten to this point. It would take me a book full to tell of the many ways God is working.

But for now, here is the condensed version.

In September 2010, just 8 months after returning from Ethiopia with our first two daughters, Nick went on a vision trip to tour care points to potentially begin a sponsorship partnership. On that trip, he met our friend Misikir. Here he is pictured in 2012 with sweet baby Eli. 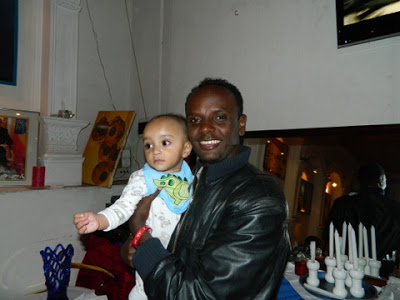 Over the years, we developed a friendship and on this last trip, we met up last minute to have dinner on our final evening there. Little did we know, God was about to use this meeting to set in motion all that has transpired over the last few months.

He told us of an orphanage he was working with in Gondar, Ethiopia and how God has called him to this area. He has many hopes and dreams for the kids in the orphanage as well as for the needy children in the surrounding community. He was working to find US supporters to advocate and partner with this orphanage as they were struggling to provide formula and food to the children. 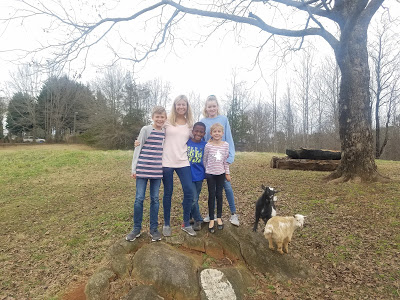 We thought it was great what he was doing, but did not feel particularly moved in any direction.
Fast forward to New Years Day, January 1, 2019. My dear friend, prayer warrior and orphan loving friend Heidi came to the farm for a quick visit.

We have prayed through so many highs and lows over the years and we both were feeling like we were on the verge of something big that God had for us, but didn’t know what. We sat on my porch swing and daydreamed about what God might be calling us too and both longed for clear direction in how He wanted us to serve him and those we are both passionate about, children in need.

God answered both of us loud and clear, directing her to a foster care ministry that she is now leading and me, the very next day, to this ministry in Ethiopia.
On January 2nd, while reading my bible, I received a message from Misikir, asking if I knew of anyone who would be interested in partnering with him to advocate and serve along side of him.

I immediately thought, that’s me. 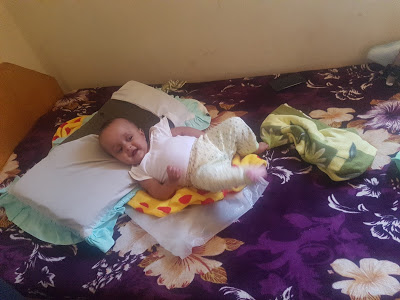 Nick and I have worked closely with the sponsorship program we’ve been a part of for the past 9 years and this has been a passion of ours. 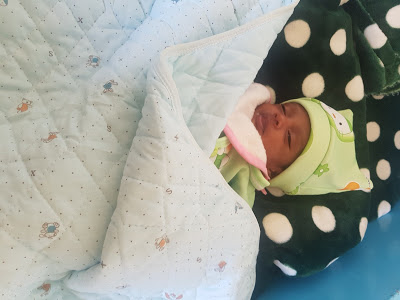 So we asked for more information. Over the next couple of weeks, Nick and I shared what we had learned with our friends.  Carl and Aimee, jumped in right away, followed shortly by Jeanie and Will and their friend Lisa. We began working on setting up a non-profit and determining how we could serve this group of children. 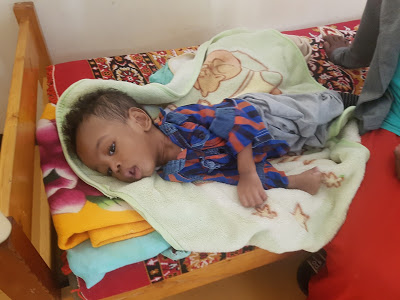 Then the pictures came.  Precious orphaned babies and special needs children in need of loving sponsors to help support them and build relationships with them.

So, this trip is a bit of a reconnaissance mission.

We have had countless conversation and emails and planned out as many details from afar as we possibly could and now, it is time to go. We are headed over to assess the needs and challenges of these children.

We have been generously gifted with an abundance of formula and diapers as well as monetary donations to provide new shoes and other supplies to these children while we are there. 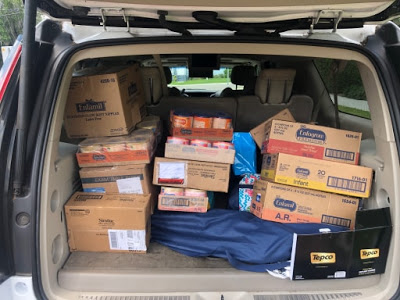 Jeanie kept saying, I don’t know why I feel so strongly that I am to be a part of this trip.  This was valid as she already has a trip to Ethiopia planned for her family of 10 in July. Never the less, she and Lisa and Aimee threw themselves into planning and fundraising and we have been amazed at the provisions that God has bestowed.  We literally were given more than we could carry, over 500 pounds of donations!

In addition to the 26 children living in the orphanage, we felt led to reach out to the surrounding community to serve the most vulnerable children in the area.  We had seen how life changing the Berta breakfast feeding program at Hope for Korah has been in that community and we’re excited to begin the process of implementing a similar program in Gondar.  I marvel at how God brought us to Hope for Korah in 2015 and gave us such a love for Korah.  It was just one of His stepping stones that has brought us to this place.  It is also a testament to the work He is doing in Korah.  The HFK staff have been super helpful in guiding us in this venture and sharing their wisdom and experience.

We are now responsible for 54 additional children from the community, ages 4-8, who we plan to enroll in our feeding and sponsorship program. That’s 80 children in all and we are bursting with excitement to meet them in just a couple of days.

I’m sure when we return, we will be forever changed by these kids whom God has entrusted to us, and we are praying that many of you who hear their stories will choose to stand with us in support of these precious little ones.

I told you I had so many stories of God working over the past 4 months, and I will end by sharing one.

Towards the end of last year, the thought that we should have another baby, (well actually 2 because you know I like even numbers and our baby girl would need a sister close to her age-yes, I had thought it through that far). I shared this with Nick, and he entertained it briefly, but given that we already have 8 kids and we are out of the baby stage, and we’re getting older, and of course everyone (except my sweet Aunt Debbie) thought it was crazy, the idea didn’t really take off.
Still, I couldn’t shake the thought. I investigated what this would look like, thought of two pretty cute names and pictured attending my kids’ graduation as a 60 year old woman (they would keep us young, right?).

I even wrote these thoughts down in my prayer journal and don’t mess with my prayer journal, because God is definitely in the business of doing more than we can imagine, so if this was His will, then it would be.

I started this post with a verse from Isaiah 55:8.  The next verse continues to say:

His ways are higher and better and of course more thought out, and instead of giving me twin baby girls like I was dreaming about, God gave me an orphanage full of babies to love.

Not only that, he went a step further.

Just last week Nick woke up early to take our boys to ride dirt bikes. I was in and out of sleep after he left and dreamed that we had arrived in Ethiopia and twin baby girls had just been brought to the orphanage and the nannies asked me to name them.

I awoke from this vivid dream to a message from Misikir. We chatted back and forth about the details of our upcoming trip. Then at the very end of the conversation, he said, “By the way, I was notified that the orphanage just took in two new babies.”

He then said that he had told the orphanage director that we could not be responsible for these two because we had settled on the number 80 as the number that we would initially advocate to support and so they would need to find other means of taking care of them while we are getting up and running with the other 80.

My heart skipped a beat.

Of course I had not shared my hair brained idea with Misikir about my twin baby girls, but I felt like I just had to explain to him that for the past 6 months I had been dreaming of having two babies and I wondered if these were baby girls by chance. He didn’t know but said he would inquire about them with the orphanage. I told them that we would absolutely take them on and that Nick and I would sponsor these two as it seemed so clearly to correlate with my dream.

I know that God’s hands are on this trip and that he has chosen us, for this specific time and these specific children and I know that He is going to do amazing things through this partnership for His glory.

I felt led to read Psalm 82.  I have read through the Psalms, but I didn’t particularly remember Psalm 82. I looked it up. It is a very short chapter, with only 8 verses and this is what verses 3 and 4 said:

I finished my conversation with Misikir and sat amazed in my bed. I then thought of the number of children we now had, not 80, but 82. I totally believe that God speaks to us.  God uses dates and numbers and names and verses to point us to him.

Well, the babies are a boy and a girl (not 2 girls) and not twins, but very close in age at approximately 6-7 months and brought in at the same time. So I am calling them my twins and I can’t wait to meet them. I think it is amazing that I’ve been longing for two babies for about 6 months, starting around the same time that they would have been born.

Our families have been so touched by our sponsorship relationships and we are praying for sponsors who will join hands with us for the benefit of these 82.